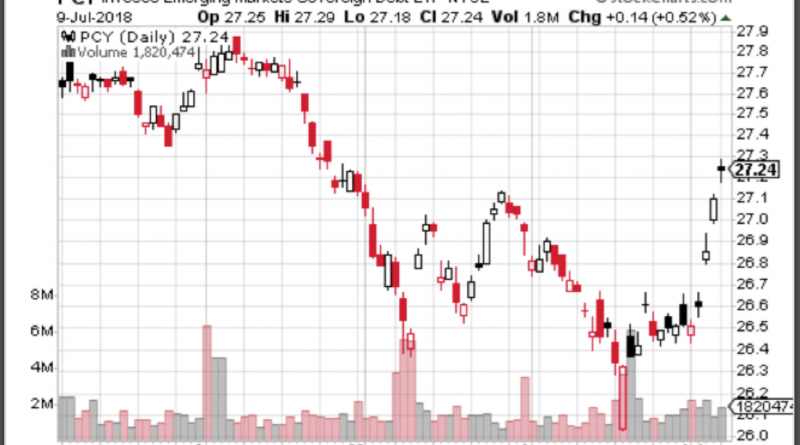 I spend a lot of time talking about block trades. These are the huge trades that show up on your options volume screeners, typically in increments of 1,000 or bigger, explains options expert Jay Soloff, editor of the industry-leading Options Profit Engine.

They can be unusual volume in a normally lightly traded name, or they may be very big trades which occur in high volume names (such as index ETFs).

Options analysts like to look at block trades to see where the action is. Usually very big trades are executed by traders with abundant capital. Of course, lots of capital usually means access to copious amounts of research as well. In other words, block trades are often done by people who have very good information.

Other times, trying to figure out the purpose of a block trade can be a puzzle. Sometimes, you never know what the traders are trying to accomplish. It’s not like we are seeing the actual trading books of these traders… just one big trade at a particular point in time.

Still, there is a lot that can be gleaned from watching block trades, especially in stocks and ETFs which don’t trade that often. They may give you an idea of where the underlying asset is headed or if volatility is going to pick up, among other things.

The trade involved the purchase of over 20,000 puts on Invesco Emerging Markets Sovereign Debt ETF (PCY). Now, an emerging market debt fund may not sound all that interesting to you, but there are some very unusual factors to consider regarding this trade.

And that’s not all…

Not only is EMB the more popular fund, it’s also much more heavily traded. Average daily options volume in EMB is about 10,500. In PCY, the average is 8. That’s right… 8 options per day. When over 25,000 options trade in one day in an ETF that normally averages 8, it definitely draws attention.

In this case, it wasn’t actually one huge block trade, but several smaller blocks of the September 27 puts (with the stock around $27.25). When you have a name like PCY which isn’t liquid in options, you may see the trade broken into many smaller parts to get it filled. And sure enough, there were lots of pieces traded, from roughly 200-lots up to 1000, with prices ranging from around $0.60 to $0.80… mostly purchases. 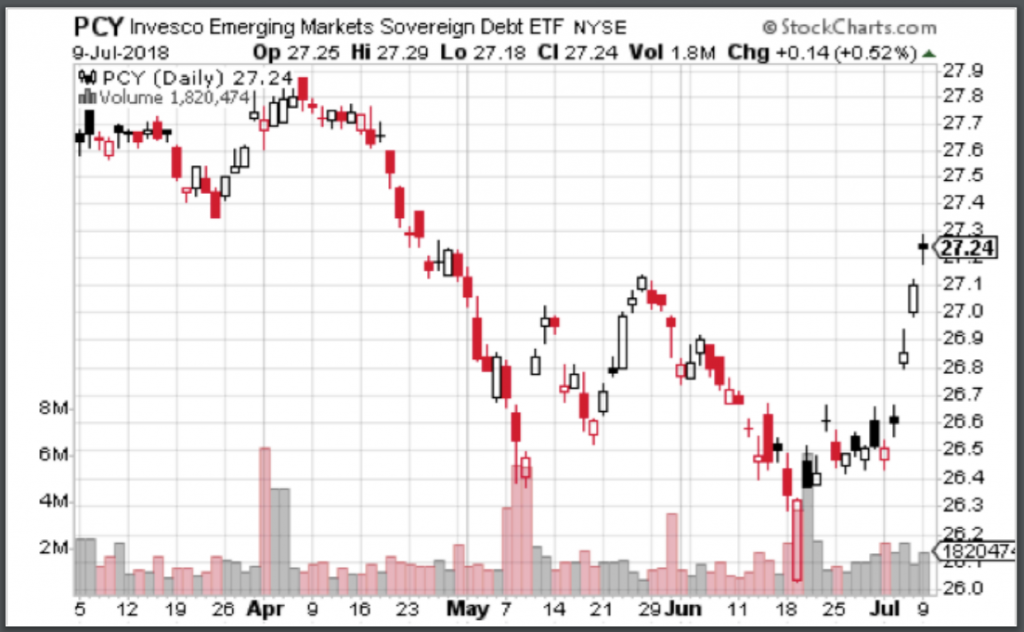 This would lead us to believe the trader (or traders) think the ETF is going down by the end of the summer. That in turn means there’s a fair amount of money (something like $1.5 million) betting that emerging market government bonds are going to take a hit in the coming weeks. You can see form the chart that PCY has been on a sharp run higher the last week or so.

This leads to several questions…

If it’s a hedge against a downturn in emerging market debt, why not use the much more liquid EMB options? For that matter, even from a speculation standpoint, you could probably get better fill prices on EMB options. Their implied volatilities were about the same at the time of the trades, so it doesn’t seem to be a relative value proposition.

I can think of two reasonable explanations, although I’m sure there are others I’m not considering. First off, the trade could have to do with the actual bond holdings of the particular ETFs. On the surface, it looks like PCY and EMB have similar exposure to countries and credit ratings groups. But, drilling down may show one has more or less exposure to a potential default candidate.

(For the bond nerds out there, EMB does have quite a bit shorter duration than PCY, but that’s probably not much of a difference maker. Perhaps more importantly, EMB has over 400 bonds in its portfolio while PCY has just over 100.)

The other potential explanation is more nebulous. Perhaps there’s something about the actual structure of the PCY ETF which is amiss.

It may be that someone very smart has figured out that given the structure of the bond portfolio, the ETF price should be lower than it is. That’s not the sort of thing I can prove, but we should know by September if PCY drops more than EMB.

No matter the reason, it may not be a bad idea to take a flier on PCY puts, especially if you’re bearish on emerging market debt.

After all, we have all kinds of tariffs to consider which could hurt emerging market countries. And, the debt problems in Italy could spill over into emerging market bonds as well. For under $0.75 a put, it’s not a bad gamble to make for those looking at something a bit more speculative to trade.