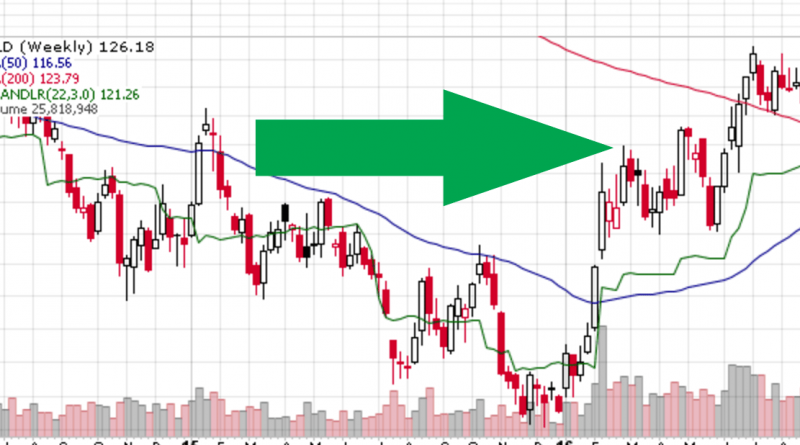 You waited patiently for the market to show you where it’s going, then bought or sold the breakout to new highs or lows, only to be stopped out when price pulls back against the new trend. And of course, once you were stopped out of the market, the market returned to the trend—without you!

Or maybe you waited patiently for price to approach a prior area of support; then you got long at that support area. Once you were in the market, price briefly violated the support area, stopping you out of your position. And of course, once you are stopped out of the market, the market climbed back above the support and headed higher—without you!

You were just ‘washed and rinsed’, which is a classic trading term for being stopped out of your position on a minor pullback against the trend. Let’s look at a chart showing a classic ‘wash and rinse’ pattern: 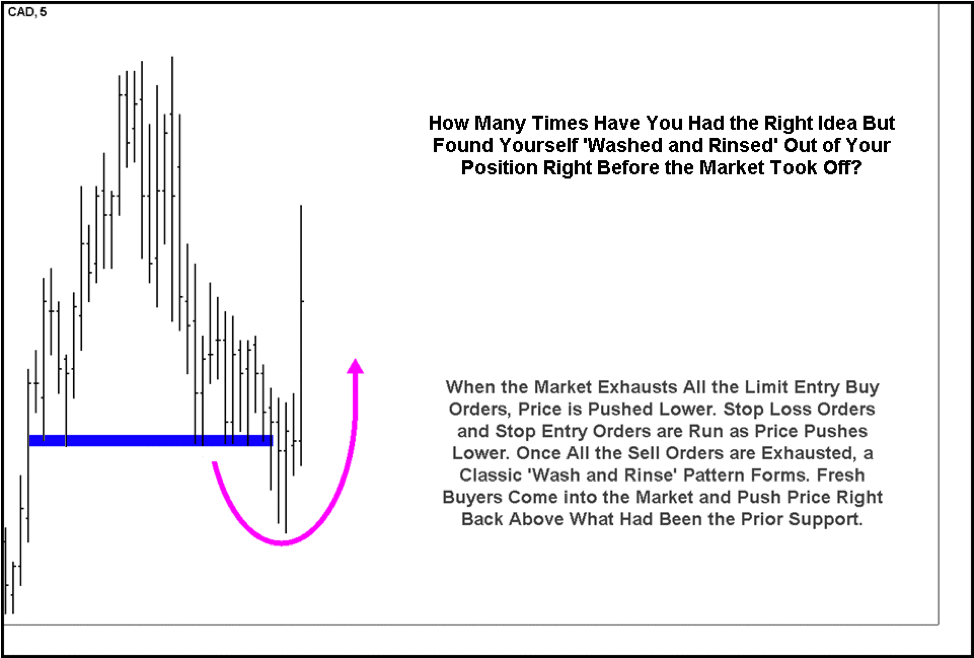 The traditional method for buying at prior support would be a limit buy order at the test of the prior multiple bottoms marked by the blue trend line and then putting atop loss order below the trend line. You can see this method would have resulted in you entering a long position and then quickly getting stopped out as price briefly plunged through the trend line area.

Getting ‘washed and rinsed’ is a common occurrence in trading. Is there a way you can avoid it?

I have been working with my students in one on one mentoring with a pattern we call the ‘Lazy Z’ that was designed to help avoid being ‘washed and rinsed’ when attempting to enter trades at these critical areas.

Let’s look at some charts and see if I can explain how we use this ‘Lazy Z’ pattern to help avoid being ‘washed and rinsed’. 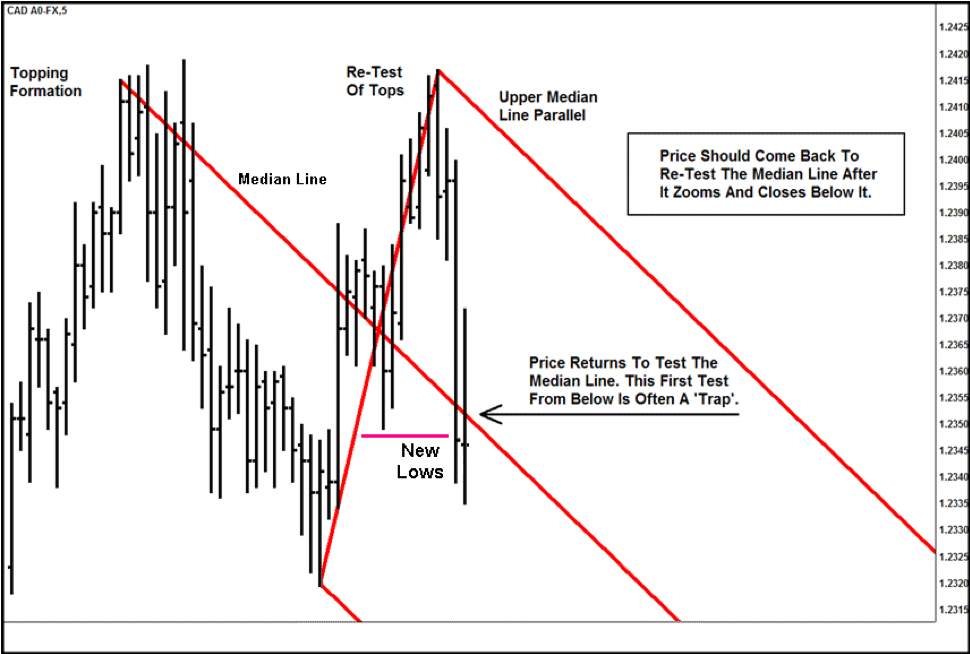 Price just ran through an area that should have slowed or even stopped and reversed: The red down sloping Median Line. In the past, traders that use Median Lines would look to sell a re-test of this down sloping line as price pulled back to it from below.

But looking at the statistics of trading this pattern over the past three years, it has become obvious that many times, this first breakthrough and subsequent pullback is often a trap.

Let’s look at another chart and see why traders are finding themselves stopped out of their positions in this situation: 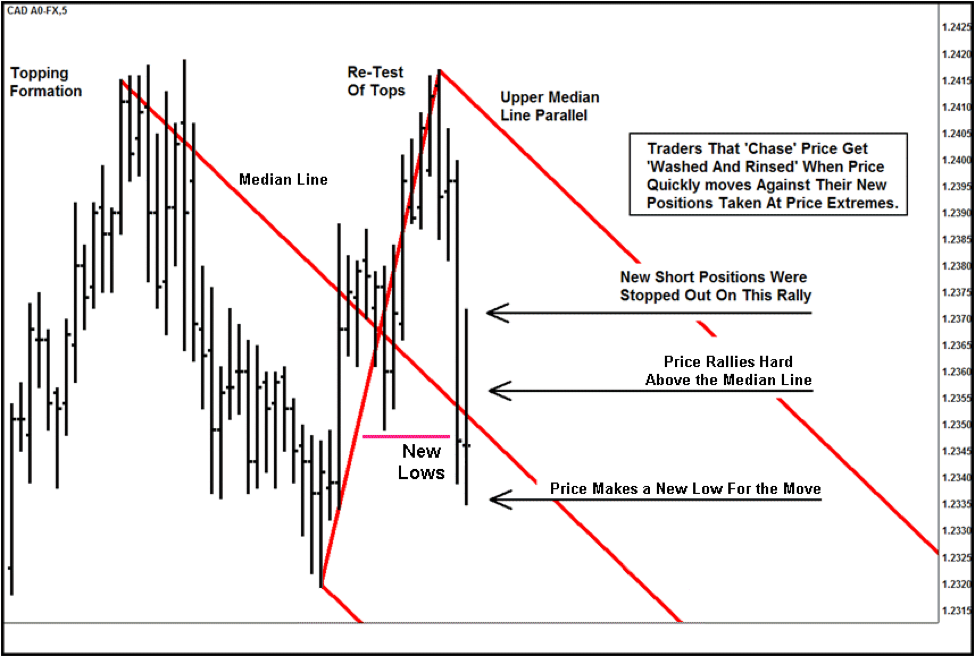 Once the selling dries up, price begins to pull back and many of breakout traders left stop loss buy orders above where they entered their short positions—and those stop loss orders are now being filled, driving the market higher. The rally after the new lows runs higher until all the stop loss orders are filled; then price settles back lower, making a marginal new low for the move. 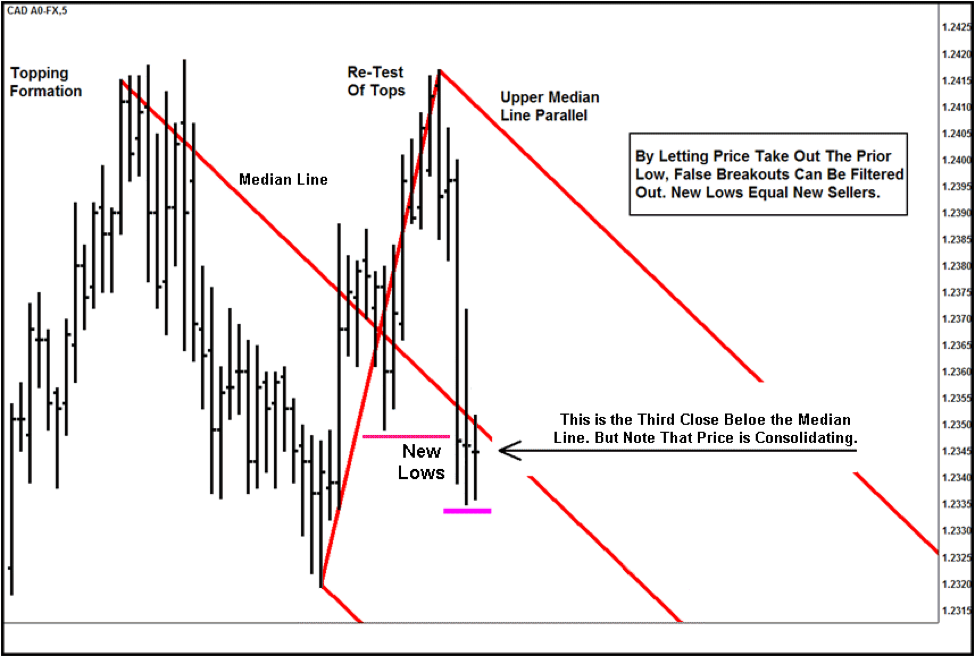 Price has now closed below the Median Line three bars in a row but it is making no progress to the downside. The traditional Median Line entry method would have been to sell a re-test of the Median Line as price re-tested it from below, but as I noted earlier, we have noticed that this entry set up has been degrading in quality over the past 18-36 months.

Also note that if you chose to sell a re-test of the Median Line as price approached it from below, there was no logical place to hide a stop behind prior swing highs. 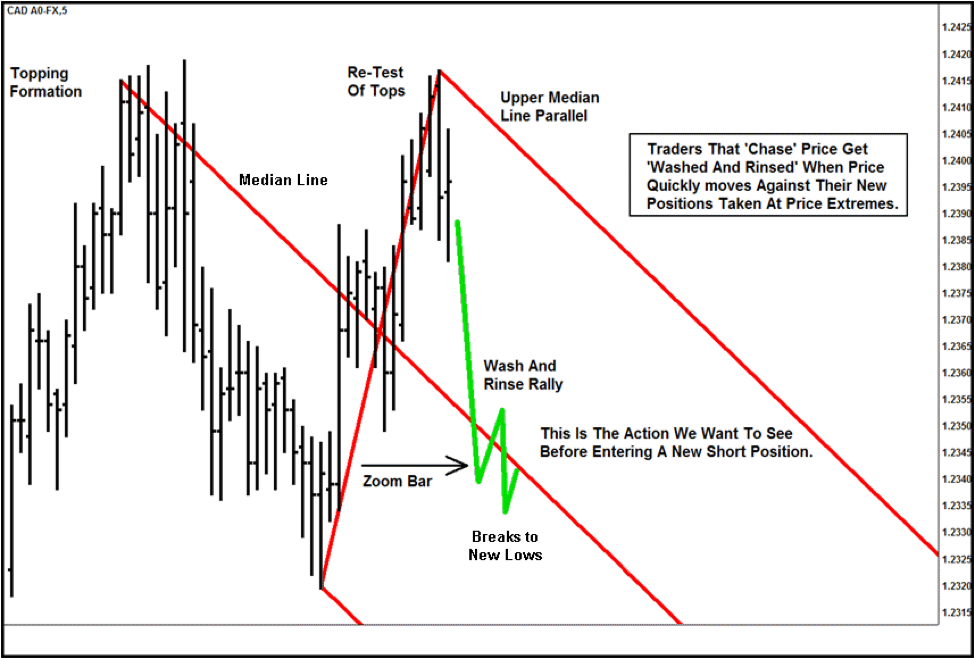 Here’s a look at the pattern we have been testing, the ‘Lazy Z’ pattern. Let me describe it for you:

1. Price makes a new low for the move, zooming through a Median Line or a trend line.
2. Because new short positions were taken by the breakout traders, a ‘wash and rinse’ rally ensues, shaking out the ‘weak’ short positions.
3. Once the new weak short positions are ‘washed’ out of the market, price goes on to make new lows for the move. 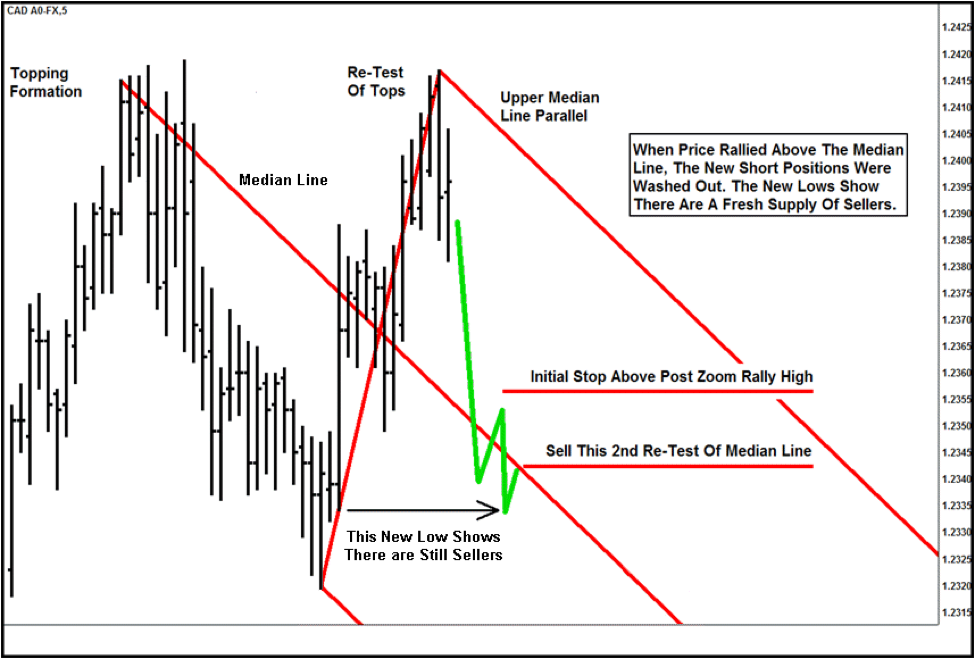 1. Price makes a new low for the move, breaking below a trend line or Median Line. In this move lower, breakout traders enter new short
positions when price breaks below the prior low.

2. A short covering rally ensues, as the new weak short positions get ‘washed’ out of the market. This rally ends as soon as all the stop loss
buy orders are filled.

3. The short covering rally leaves a ‘pseudo’ swing high that is above the trend line or Median Line, but near enough to the current action to be
useful when attempting to hide stop loss orders.

4. Fresh sell orders enter the market and push it to new lows again. This second wave of selling confirms that there are new sellers available to
push prices lower—in effect, the second low confirms that the trend is likely to continue. When a new low for the move is made, it confirms the ‘pseudo’ swing high as a true swing high, and there will now be limit sell entry order at or near that new swing high that you can use to protect any short positions you initiate.

5. Now you can enter a sell order at the re-test of the trend line or Median Line in case price approaches it from below. If filled, your stop loss
order will be above the recently formed swing high.

Now that I have drawn it all out and described it, let’s see how the market behaves: 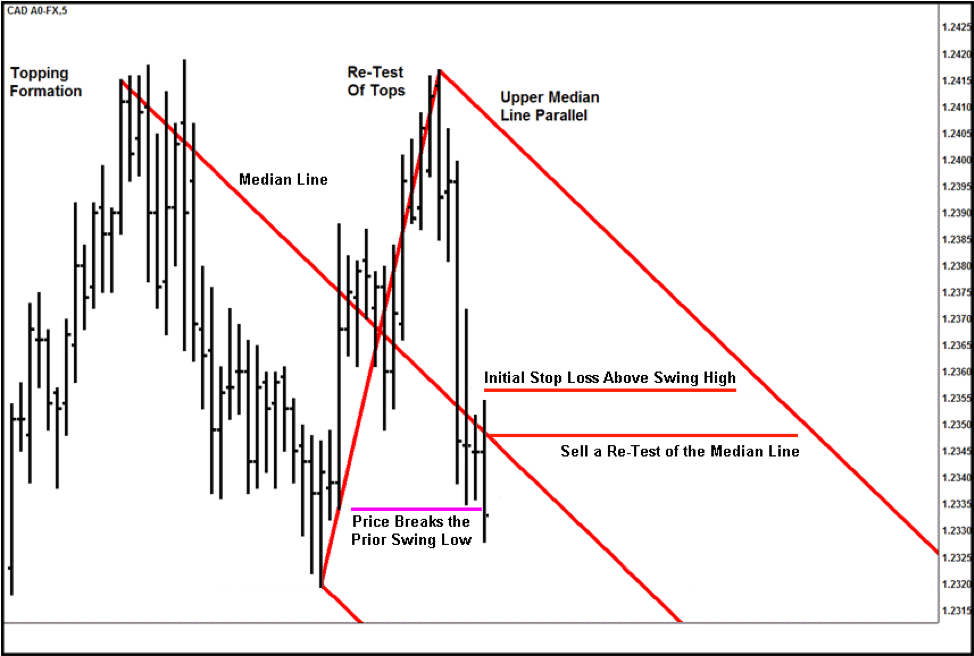 Price makes a wide range bar lower. Note that it leaves a higher high and a lower low! This bar marks a new low for the move and the high of this bar is now a ‘pseudo’ swing high.

I place orders to sell a re-test of the red down sloping Median Line. I price rallies to the Median Line from below, I want to enter a short position and my stop loss order will be above the new ‘pseudo’ swing high. 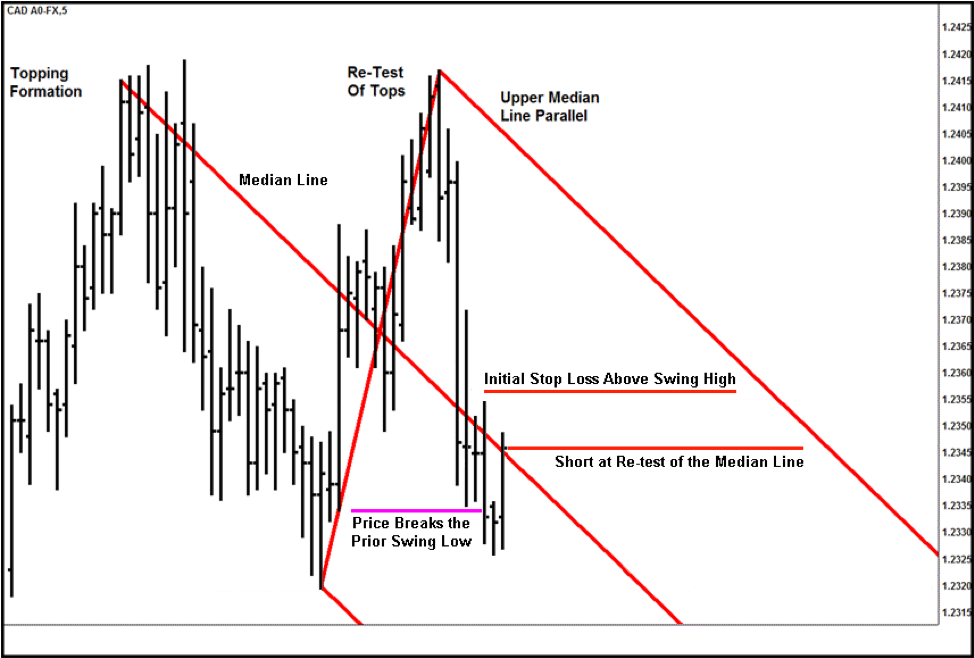 Price makes a new low for the move, confirming the ‘pseudo’ swing high as a true swing high and then rallies to test the Median Line. I get short at test of the Median Line and my stop loss order is above the new swing high, where there should be limit entry sell orders left by traders looking to enter new short positions.

These orders should act as protection and help keep me from being ‘washed and rinsed’.

Price rallies a bit higher but then the selloff begins again. Note that my stop loss order was never in danger. Now I can focus on managing the potential profits in this trade as price continues to make new lows. 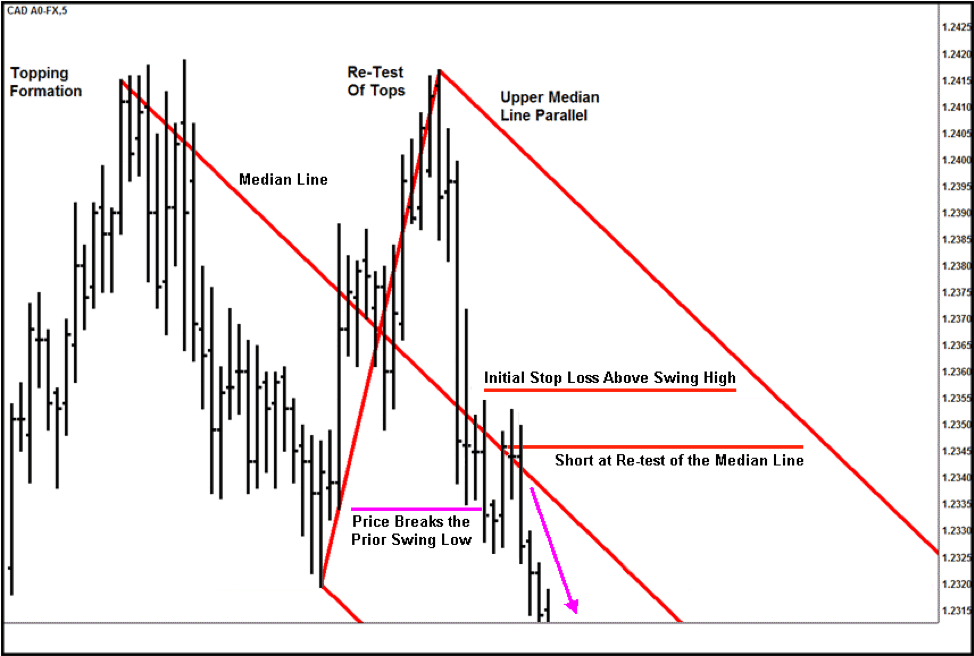 Let me show you the same ‘Lazy Z’ entry technique used on a trend line:

You can see that price has tested this trend line many times and each time, the trend line held and a new rally was spawned. But if you look carefully, there were at least four occasions where selling new lows led to getting ‘washed and rinsed’ out of a short position. If you had tried to sell new lows four times and gotten stopped out four times, would you have been able to sell the fifth break to new lows? Would you have been able to sell the sixth break to new lows?

Rather than sell blindly selling new lows, smarter traders have started waiting for a pullback to sell: they have learned that ‘what was resistance has become support’ and are trying to exploit it. But even this method has become susceptible to the ‘wash and rinse’ pattern.

I suggest you don’t sell new lows or buy new highs. There are too many false breakouts and most of us are not equipped emotionally or financially to be there for the fifth or sixth or seventh breakout if we have sold and been stopped out of the prior four false breakouts.

Make certain there is a fresh steady stream of sellers by sitting on the sidelines until price makes a ‘wash and rinse’ rally, then makes a fresh new low—and THEN enter your limit sell order with a stop loss order above swing high just made when the weak short positions were forced to cover.

You will have found confirmation that there are fresh sellers and now you’ll have a swing high to hide your stop loss order above, ensuring some protection from limit sell entry orders.

The markets change and evolve. If we don’t do our homework and adapt accordingly, our trading profits will suffer and eventually disappear.

Give yourself time and room to be right on your trade. The Lazy Z pattern will help you do that.